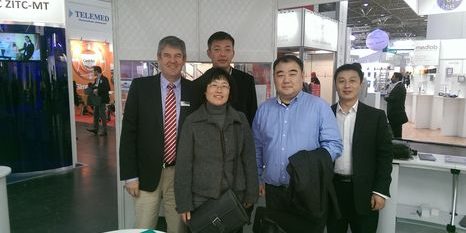 The Baden-based laser system manufacturer has been established in Germany and Europe for decades. For example, MKW is currently marketing its low-energy lasers in almost all countries of the “Old Continent”, and most recently in September 2014 continued to focus on specific subjects at the IVA Acupuncture Congress in Florence.

MKW in the US

In addition to the company’s 30th anniversary, MKW also celebrated its entry into the US market in 2014. There were two opportunities to present MKW laser systems to a specialist audience: the AVMA Animal Denver Congress in Denver and the AAD Dermatologist Congress in Chicago.

In addition, MKW CEOs Mink and Kirchenbauer thrilled the employees of numerous practices, clinics and retail companies with their low-energy laser technology during a two-week US presentation tour with presentations and lectures.

The (provisional) culmination of US market access: Opening of a MKW representative office for the USA in New Jersey.

But not only “in the west” MKW is active. The laser shower PowerTwin was recently approved in the Chinese market and the contract with a Chinese trading partner was promptly concluded.

A subsequent MKW appearance at the “International Medical Equipment Fair” congress in Chongquing, China once again clearly showed just how impressed the original specialists in acupuncture at MKW Softlaser-Technik are.